Drugdriving.org.uk
Drug Driving .org.uk
'
Drug Driving & The Law
The roadside swab identifies drug drivers on the spot! Its like a breathalyser for drugs!
FREE LEGAL ADVICE DRUG DRIVING PENALTIES
YOU ARE HERE: Home 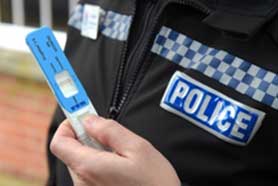 Drug driving is similar to drink driving; if a person drives, attempts to drive or is in charge of a vehicle while exceeding the legal limit of a specified controlled drug, they will be committing a criminal offence.

The new drug driving offences came about in an effort to help reduce the amount of wasted time, effort and expense involved when prosecutions often failed under Section 4 of The Road Traffic Act 1988 [2] (Driving or being in charge, when unfit through drink or drugs).

In order to secure a conviction of driving while unfit through drugs under section 4 it has to be proven that a drivers ability was actually impaired by a drug.

To secure a conviction of driving while exceeding the legal limit of a specified drug under section 5A no proof of impairment is necessary. Proof that the level of drug in a defendants body at the time of the offence exceeded the legal limit is sufficient.

The police can test suspected drug drivers at the road side using a preliminary road side drug testing device. The securetec drugwipe 3S can detect traces of cannabis and cocaine at the road side in a matter of minutes.

If a driver fails a road side drug test, a preliminary impairment test or refuses to co-operate with preliminary tests they will be arrested and required to provide a blood or urine sample for analysis.

A driver can be arrested and required to provide a blood or urine sample for analysis if the police reasonably suspect they have been driving, attempting to drive or in charge of a vehicle and have alcohol or a drug in their system.

There is a defence to the new drug driving laws under certain circumstances where a person is taking legal drugs for medical reasons.

The penalties upon conviction of drug driving are severe, they include:

Other consequences may include:

If you take prescription medication you must take your medication as instructed by your GP or relevant healthcare professional and/or in accordance with any instructions contained within the patient information leaflet (PIL) of the medication.

Remember, if your ability to drive is impaired by drugs: DO NOT DRIVE!
You can be prosecuted under section 4 of The Road Traffic Act 1988 if you do, even if you do not exceed the legal drug driving limits.